Greetings Explorers of the Forbidden Realms!

We all love our maps, don’t we? 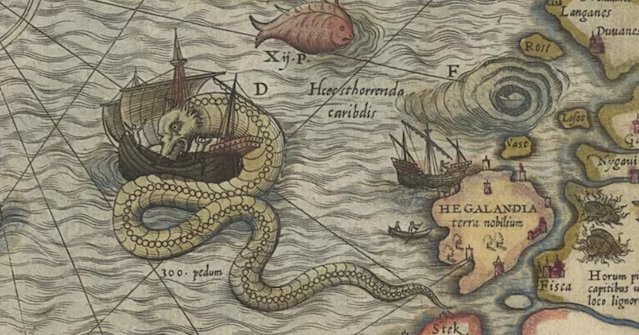 The monsters do exist indeed…

The map system is also an important aspect of Stygian which adds another layer of gameplay to the experience with also the help of some basic survival systems built around it. Whether it’s a must-go destination of a quest stage, specific hub or the location of a random encounter, all points of interest in a given instance will be displayed in the maps of the game.

There are two kinds of maps in the game: Area Maps and the Regional Map. A good example of an Area Map is the map of downtown Arkham, which displays various hubs within the downtown area. These hubs will be accessed manually, through regular means of travelling in the exploration screen. 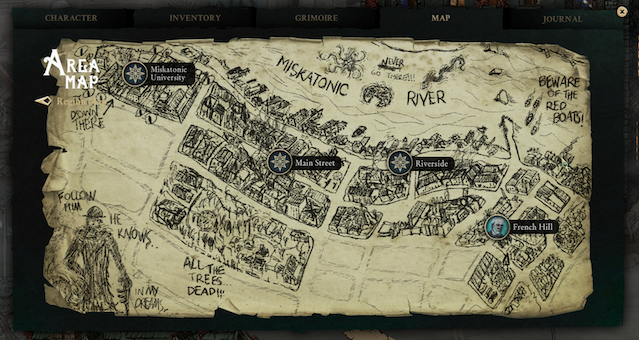 The Downtown Area Map with four different hubs which the party can travel to. Miskatonic University hub will be unlocked at a later stage and will feature its own travel map.

Then there is the Regional Map, which shows the landmarks and hubs in the greater area of the game world. The party is able to travel long distances in the regional map, but in order to do that, the player must acquire the necessary information pertaining to the location and content of those landmarks.

The Regional Travel Map has several features. Over at the lower left corner, there is a text log which conveys information about the state of the party members, modifiers they receive, changes about health/sanity points, general game logs about your encounters and brief notes/descriptions. In the middle there are three indicators, Kerosene meter, Health bar and Sanity bar. Next to it are resource indicators. On the far right there are two buttons. Respectively they are: the Halt button and the Rest button. If the party has in its possession enough resources, the player may wish to rest anywhere he or she sees fit. 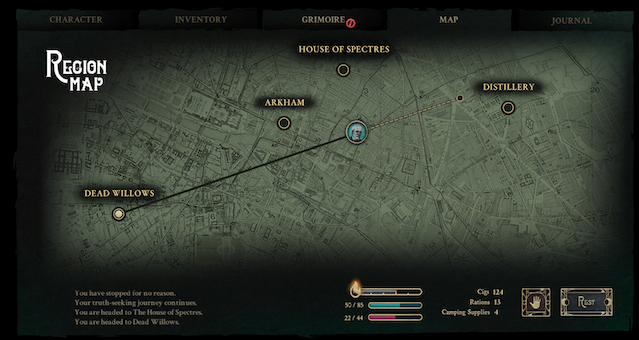 Here’s how the Regional Travel Map looks like during a journey through the suburbs. Notice how the trip started from the location of a previous encounter and is bound for Dead Willows.

There are two types of map encounters: Obligatory and Random. Obligatory encounters are derived from quests and appear at a certain stage during quest progression. They cannot be avoided nor by-passed and are crucial for the progression of some quests.

Random encounters on the other hand, as their name implies, will appear to the player through other variables and luck plays a big factor. Their selection by the game and their content will depend on the area in which the party passes through and the level of the party. The random encounters might take place as one of the many battle scenarios or as challenges in the style of a “choose your adventure” game, where the player will utilize its skills and stats through the selection of various dialogue options. 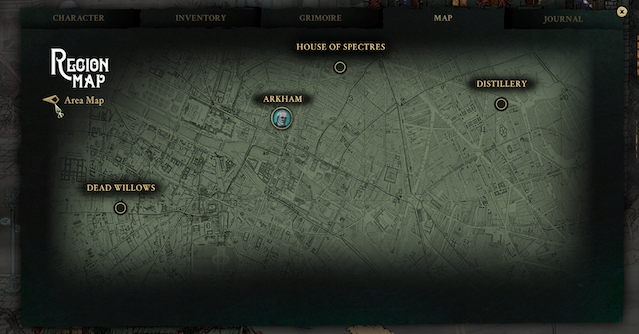 The player can view the Region Map anytime he or she wishes but the travelling option only becomes available when the party exits a certain hub which has an access to it.

The party is able to have some control over its choices as to how it wishes to approach some scenarios by the use of Sense Threat (Senses + Investigation) and Counter-ambush(Senses + Survival) stats. A successful Sense Threat check will provide information about the encountered situation and will grant the party a chance to engage or withdraw from it. A successful Counter-ambush check will grant the party a chance to avoid a possible ambush.

This takes us t-

Uh, excuse us ladies and gentlemen…

(A BUZZING IMITATION OF HUMAN SPEECH)

We are hearing the call again.

Stygian calls us to do its unspeakab-

(SPEECH CUT OFF BY END OF RECORD)